Susan Woodings is the head engineer of Bunny Smiles, Inc. She is responsible for the creation and designs of every member of the Showstoppers, and most likely worked alongside Jack Walten and Felix Kranken for the design process. Chronologically, she is the first BSI employee besides Jack to have died, her body being stuffed into the animatronic of Banny.

Susan is a fair-skinned woman with brown hair and greenish eyes. She also has a tall face, and her shirt in her profile is white. However, in the Bunnyfarm minigame, she is seen most likely with the BSI employee uniform.

However, her appearance as a corpse is much different. Her mouth is further down and located near her chin, while her eyes have black irises and her hair is either tied back or missing. When transformed, her eyes are bloodshot and a sickly green, and her mouth is out of shape, taking the form of an underbite.

In Tape #2, Susan is first seen underneath Banny’s head when the program “Looking For Friends,” is run. She sees something to the left and right of her, and her face is seen to be smiling. Finally, when Banny looks directly at the camera, her mouth is widened, but is cut off with Banny trying to escape a room with four doors. In the backdrop, the narrator tells of the Mighty Rabbit’s attempts to flee, but is unsuccessful, as it then tells that the rabbit is starving. Banny gives up all hope and cries. After the split second image of a purple rabbit in a cage, Susan’s missing poster is barely shown, where she was last seen on the 30th of June, 1974.

It should be noted that at the end of the video a voice can be heard saying "Shadow Man feeds me, when lights go off". This is likely from Susan Woodings, due to her link to starvation, but this is currently unconfirmed.

Susan reappears in Bunnyfarm, after Sophie completes the puzzle rearrangement. She states in her third audio log that Jeremy’s birthday party, the first party at Bon’s Burgers, finished an hour ago and she stayed behind to help clean the place. She notes that the week has been strange, because of the fact that the place was opened even after Jack disappeared a few weeks ago, and Rosemary had made her daily routine of going to the restaurant and asking if he’s been around, which worries Susan. What’s stranger is that Felix was worried too, yet he still continued with opening with the restaurant. However, besides the point, Susan believed that Jeremy’s party went swimmingly, and that she was easily able to notice irregularities in the audio of the animatronics, considering she’s the lead engineer and “the person who basically built the animatronics to begin with...” She took note of the oddities of Bon’s movement, as his limbs weren’t moving properly, and seemed stiff, especially in his right arm. She decided to take Bon backstage and check up on him. She was the last employee there, as Chris left a few hours ago and Felix, oddly enough, didn’t even show up. Though, she considered this to be a quick job, and she would close the restaurant after she’s done.

In the backstage, her character, controlled by Sophie, picks up a wrench and goes over to Bon. However, she is attacked by him, and a picture of her causes the segments of her eyes and mouth to drag down. She then reappears in her newer facial structure, possibly by Bon’s attempts to make her face “beautiful” and fit over Banny’s endoskeleton. However, her face shifts again, her eyes bloodshot and blue while her jaw seems to be beyond repair. It is then covered by Banny’s head. Sophie then regains control of Bon’s character and picks up a package, revealing an image of a slumped over Susan, paired with the words:

”I am still alive

but I cant move

and I'm having trouble breathing

and my stomach feels weird”

The gift (Susan’s remains) is then placed inside Banny, which makes her eyes bleed and the sprite seems to be breathing. A victory screen is shown, which reads: "great job, SOAPIE!! YOU JUST MADE SUSAN BEAUTIFUL!!!!” This then cuts to Banny staring directly at the screen, but her head slowly rots away and shows Susan’s face, now staring directly at Sophie. 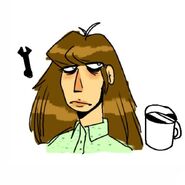