The New Walten Files Wiki
Register
Don't have an account?
Sign In
Advertisement
in: Characters, Waltens, Worked At BSI Before, Humans

Soapie (due to a irreversible typo in BunnyFarm)

Sophie Walten is an important character in The Walten Files and arguably the main protagonist. She is the daughter of Jack and Rosemary Walten, and the older sister of Edward and Molly. As of October 1982, she lives at the Entfernt Hotel along with Jenny Letterson.

Sophie and her girlfriend, Jenny Letterson, are heard discussing the arcade game BunnyFarm during their playthrough. Throughout the video, Sophie is shown the events and info on many of the Bon's Burgers victims in varying degrees of clarity, including Susan's death, part of Felix Kranken's backstory, the death of the man haunting Boozoo (who is possibly named Charles), and her mother, Rosemary's, death. At the end of the video, Showbear (also known as MemoryBear) appears to her from a well and tells her the story of her sibling's deaths during a car crash caused by Felix, who was driving the children home drunk. Sophie is heard a few times during this segment and seems to be crying, horrified at the events she is witnessing. She does not speak at all towards the end and it is unknown if she left the room or is silent due to shock.

She appears in the cartoon holding a lighter and wearing a Bunny Smiles Inc. caretaker uniform while Bon looms over her. It is speculated that Sophie will eventually start working for Bunny Smiles Inc. to find more information on her father's disappearance.

A pill bottle with Sophie's name and the repeating mantra of "Safety in pills, Sophie", suggests that she uses medication to repress her childhood memories.

In a TWF anniversary image, a poster of Sophie wearing a collared shirt can be seen. She has her mouth wide open, and under her are the words "Sophie Walten - 07.30.1974" Since Sophie is alive up until at least 1984, this poster could possibly be depicting a teenage Sophie somewhere in the 70's or 80's.

Not much is really known about Sophie’s personality, as the pills that she takes most likely sedate her from all of the trauma that she has experienced. However, she is curious, as even after seeing the events of Billy’s mini game, she wants to know more about what she can find, as she begins to piece together the events as to why she’s being shown these images.

In all her appearances up to now, Sophie has had tanned skin, dark curly brown hair cut to her shoulders, dark brown eyes and a long sloped nose similar to her father's. In some of her other depictions, she appears to have a mole under her left eye.

In the trailer and BunnyFarm, Sophie is seen wearing a letterman’s jacket bearing the insignia “Brighton 82,” and in the Company Introductory Tape, she is wearing the classic purple BSI caretaker uniform with her name written on her hat.

Before the change to Findjackwalten.com on January 1st, the link findjackwalten.com/sophiewalten lead to a string of text, which showed a conversation shown between Jenny and Sophie after the events of The Walten Files 3. The website read as follows:

"If you ever get uncomfortable or nervous in any way, please tell me, alright?"

"Why are we recording this, again?"

"Hey, you said you have trouble remembering stuff, right? This might be really helpful."

"What about the oldest memory you can think of?"

"...It's summer, I'm still in my teenage years, and I'm inside a police station."

"Uhm, why are you there to begin with?"

"That's fine, hm, do you remember anyone in particular that you used to share a lot of memories with?"

"Wow, you never told me about her, what was she like?"

"She looked like me, but she had curly dark brown hair, she was tall too."

"During most of summer, it was just the two of us."

"What about the rest of your family?"

"Hm, okay okay, let's stick with her, what was her name?"

"As in, she'd let you know if something annoyed her."

"...Yeah, it wasn't until my dad well.. disappeared that she started acting different."

"She became more unstable, not as in.. she became insane or something, she just, felt more 'sad', I could tell whenever she'd try to act nice so I wouldn't feel bad myself, her eyes had a certain..... look to them, a sad look."

"Yeah, and she was extremely over-protective with me, I can't quite remember why."

"I don't remember a lot about my dad, most of the time I would spend it with my mom, my dad was always busy with work."

"I can't remember. Only thing I remember is his voice. A deep, quiet and very intimidating tone whenever he would speak, he'd barely ever raise his voice too."

"You mean whenever he was angry?"

The poster for season one of the Walten files, depicting Sophie and multiple other characters

Sophie in the Company introductory tape, wearing the BSI caretaker uniform and holding a lighter. Bon is seen looming near her

Sophie as seen in the trailer for BunnyFarm 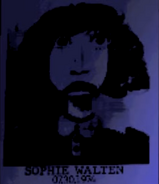 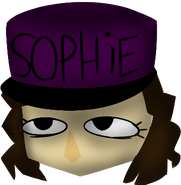 A drawing of Sophie and Jenny made by Martin Walls

A drawing of Sophie, along with the main cast, made by Martin Walls

An image of Jenny and Sophie from Martin's Twitter.

A poster of Jenny and Sophie.