The Pumpkin Rabbit appears in the non-canonical Halloween special ‘The Mysterious House’. The Pumpkin Rabbit is the responsible person for the murders of the children who enter the house on Halloween. He shares a model with Bon, like Mortality.

Pumpkin Rabbit has an orange coat of fur, with the undersides of his ears and his belly being a lighter shade of orange. He sports a yellow mask that depicts a twisted smile and yellow snout. His arms, neck, and legs are dark green, similar to a robot’s skeleton as well, and he wears a purple bowtie around his neck. He also appears to have some kind of hole or tear on his upper chest. When his mask is removed, it's revealed that his true face resembles a rotting corpse, with charred skin and bloody gums.

The Pumpkin Rabbit seems to be very polite, well-mannered, and welcoming when he first meets Duckie and Tammy. However, this is just an act as a way to lure in children. Later on, it is revealed that The Pumpkin Rabbit is a psychopath who murders children every year on Halloween. He is not fazed by what he’s done, and remains calm and polite while preparing to murder Tammy. He sees murder as a punishment for children seeing what they shouldn’t. A clue to The Pumpkin Rabbit’s evil nature early on is his voice, which is very deep and unsettling, unlike any other character in the Mysterious House. 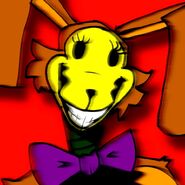 Pumpkin Rabbit in the door 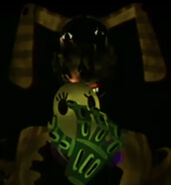 Pumpkin Rabbit taking his mask off

Pumpkin Rabbit kills Tammy with his mask off