The BSI Storage Facility (K-9) is a bunker that is used to store items of value, from Bon's Burgers after it closed.

After the first clip ends, a clip of what seems to be a news broadcast starts playing. It states that due to an incident in Bon's Burgers, all props, animatronics and arcade machines will be moved into a bunker, somewhere in Saint Juana's forest. It also states a facility caretaker will take care of securing the facility, keeping it safe and working properly. It isn't mentioned again until the third clip, where the new facility caretaker (Brian Stells), is driving to the facility through the woods. When he gets there, he mentions a person named Chris told him that the facility hasn't been working since the late 70s. After entering, he finds a Bon animatronic. He then uses diagnosis equipment to see if Bon's movements are working properly. Though after mentioning that his left arm is broken, something happens which gets Brian to run out of the facility, before presumably getting killed by Bon.

In the first clip, the announcer states that the animatronics were sent to a Storage Facility after the closure of Bon's Burgers. The third clip is a technical support guide for the employees going into the K-9. A cartoon Sha mentions the equipment needed to go into the facility. After which, it cuts to Little Bon outside of the entrance discussing the items to bring to the facility. It then cuts to the first room, the resting room. Sha mentions that in this room you can "sit down, rest, talk with co-workers, you name it", before eventually going to the next room, the main hall. There are three doors in the area, Sha explains each of them. The first door is used to store cleaning items and supplies, the second door is used to store prizes and merch that were available in Bon's Burgers. When Sha starts explaining the third door, all she says is "The third door is used to hide-" before being cut off. In the basement's main storage area, after Sha says a backwards message, she explains that the room is used to store important items used in Bon's Burgers. Sha then says to follow her to the next door, before disappearing. The next room is the animatronic storage, though after this, not much more info on the K-9 is stated. The fourth clip is about three BSI employees (Ashley, Kevin, and Hilary) who volunteer to stay 3 days at the facility, in order to reprogram the animatronics for the relocate project. When they go inside, they find that the animatronics are in terrible condition, and it's almost impossible to add new features to them. When they try to go to sleep, Ashley points out a key that they were given, but were never told what its use was. But Kevin insists that they spend the rest of their time fixing the animatronics. Though later in the night, Ashley goes off to find the use of the key. Eventually, she finds a door labeled "Backdoors" that the key unlocks. Going inside, she finds a bunch of doors, and looks through them. The first door she goes inside has scrapped animatronics inside of it. The second door she goes inside has spare heads. The third door has an animatronic of "that old doll". The final door that she goes inside has a Billy animatronic, and a tape labeled "Discard" next to it. She puts it into the Billy animatronic, it starts playing music, but then cuts to a list of names. Then Ashley's light goes out. And when it turns back on, she is killed by the Bon animatronic.

One of the pictures at the beginning shows the animatronics in the facility, labeled "01/23/1975" 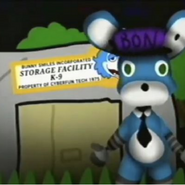 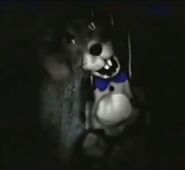