"Just- What the hell is wrong with you?" - Jack Walten, during his second call, addressed to Felix Kranken after not answering.

Jack Walten is a major character in The Walten Files. He is the co-founder of Bon's Burgers and the father of Sophie Walten. His disappearance kicks off many of the events that happen in the series.

Jack Walten was married to Rosemary Walten, with whom he had three children: Sophie, Ed, and Molly.

He is 42 years old, and 6'2. Although there is no a colorized image of him, it has been confirmed in the website that his hair color is brown and his eyes are black. His suit was said to be a dark red color by Martin Walls[1], and according to the website, he was last seen wearing it. (citation needed)

He was born September 23rd, 1932. He is described as a hard working man and the happy father of 3. He had a seemingly happy life before the events of The Walten Files. He studied in Cleary University in Livingston County and graduated in 1959, on the same year he married Rosemary. He would later raise a family with her.

He was highly known in Brighton, Michigan for his company "Bunny Smiles Incorporated" and his restaurant franchise "Bon's Burgers" which he was in the process of opening with his close friend, Felix Kranken.

One day, on May 2nd, 1974, while Jack was busy at work and his wife was busy taking Sophie to the dentist, he called Felix to ask him to pick up his two younger children, Ed and Molly, and bring them to a school party, then get them back home at 9 pm. Felix refuses at first, as, unbeknownst to Jack, that same day, Linda, now Felix's ex-wife left him because of his alcoholism. But when Felix hears it's about Ed and Molly, he agrees.

During the school party, Felix left the children on their own, where he drank excessively in the adults-only area. Molly and Ed, after finding him, question his condition, but still had to go home, since it had already been over an hour since Felix was supposed to drive them home. On the way to the Walten’s house, Felix lost control of the car, killing both children in the crash immediately, and burying them in Saint Juana's Forest. Jack is heard near the end of the flashback sequence of BunnyFarm, frantically calling Felix dozens of times and berating him in voice messages, worried sick about his children who were supposed to be home hours ago.

It is unknown what happened between Jack and Felix after this night up until his disappearance, which was 40 days after the events of the killings of his 2 children.

After his disappearance and the opening, his wife would go to the restaurant everyday hoping he would come back, but he never did.

Jack's personality has not been revealed all that much, since we have not seen much of him. He is described by others as hard-working and a happy father. Martin Walls has said he is a good husband and father. Despite this, Jack has extreme anger issues, that he will get so angry that the only person who can calm him down is Rosemary. However, he is not abusive to either his wife or children.

Felix Kranken and Jack Walten are close friends who met in Cleary University. They bonded over wanting to start an animatronic-themed restaurant, which eventually their shared dream became a reality. They were the owners and founders of Bon’s Burgers. Their relationship takes a sharp turn when Felix got into a car crash due to him being drunk enough to not pay attention to his own driving behavior, and accidentally killed Jack's two youngest children, Edd and Molly Walten. Soon after that, Jack went missing. Though he cares about Felix dearly, Martin has stated that Felix is often the one to cause him to lose his temper.

Rosemary Walten is Jack Walten’s wife. She and Jack show no signs of having a struggling marriage before Jack goes missing and Rosemary dies. It is stated that their relationship is healthy.

Mr. Jack Walten, born September 23rd, 1932, was a hard working man and the happy father of 3. Walten studied in "Cleary University" in Livingston County and graduated in 1959, on the same year he married Rosemary Peony Walten. He would later raise a family with Rosemary.

Mr. Walten became highly known on Brighton, MI. for his company "Bunny Smiles Incorporated" and his restaurant franchise "Bon's Burgers". However, he would mysteriously disappear 2 weeks before the opening of Bon's. Little has been known about Jack's whereabouts for the past 4 decades, but there's still hope to get closure on this man's disappearance.

Most recent news about Walten's disappearance goes all the way back to the year 1979. Felix Kranken, company co-founder of Bunny Smiles would state the following in a radio interview.

"I still wonder about what happened to my best friend, to this day I get people asking how I've handled the situation, how I've managed to keep on with this company knowing that he's been gone for years. It's hard to look back at Jack, because... I know that those happy memories and experiences I had with Walten and his Family will never happen again. And he'll never get to see what our dream company turned out to be. But there's still hope, I guess"

Please contact us in case of any sighting or clues as to what could've possibly happened to Mr. Walten

Note: these are not confirmed/canon nor are the creators of the wikis claiming them to be so, these are just some possible theories made by the fandom.

A photo of Jack Walten and Felix Kranken.

Jack Walten taking the place of Billy in Little Bon's friends list for the sleepover.

Ditto but its a movie.

Ditto but its a missing poster.

Jack in a car

An image of Bon's Burgers with Jack hidden in the background.

Jack after Felix compliments his egotistical self.

Jack in the dark.

Jack peeks out of the backpack.

An image of Jack.

Another image of Jack.

Yet another image of Jack.

An image of Jack but its Upside-Down 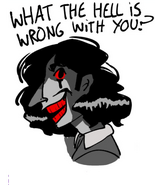 Drawing of Jack with red eyes and teeth and "What the hell is wrong with you?" above him. 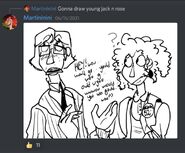 Jack and Rosemary in High School, as seen with the button “Brighton 52” 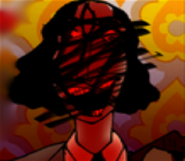 Jack but with his face scribbled out.

Rocket and the Waltens besides Sophie from "It's That Time of The Year!"

A blurry picture of Jack Walten.