"Apparently there was this one employee that drove to some forest a few days ago, not too far away from here actually. He hasn't been seen around ever since he drove to that place."

Brian Stells was a former facility caretaker for Bunny Smiles INC. During his first day on the job at K-9 Storage Facility, to repair the animatronics as a part of the Relocate Project, Brian was chased out of the facility by Bon and murdered in Saint Juana's Forest. As of BunnyFarm, he is the most recent known victim.

Brian is a blonde male, assumed to be of average height, and has black eyes. He has been seen wearing the BSI uniform, and a blue suit, with a striped button-down shirt and a purple tie.

His corpse is wearing the standard BSI uniform. He appears to have his eyes gouged out and the jaw either ripped out or severely broken and dislocated.

Brian Stells first appears in the Company Introductory Tape where he is driving down a trail in the Saint Juana's Forest on October 10, 1982, 12:44 AM, where he has already been driving for 20 minutes due to how difficult it is to find the K-9 Storage Facility. He is recording himself on his first day on the job as the new facility caretaker due to BSI wanting an archive of his progress with the animatronics.

He finds the entrance to the K-9, where he mentions that Chris, has told him that the K-9 Storage Facility has not been used since around 1978 or 1979. Upon entering, he exclaims that it smells like a sewer, which is likely due to Ashley Parks' rotting corpse in the basement of the facility, which has been there since her death in 1978.

He finds Bon in a very poor, dilapidated state, and begins working on diagnostics, with the control panel already being there. He checks the head, mouth, and right arm without issue, however, he notices the left arm is broken. Upon saying this, Bon begins to move on his own, waving his limbs up and down and making odd noises.

It is implied that Bon attempts to attack or kill Brian, prompting him to run out of the facility and into the forest, exclaiming "WHAT WAS THAT THING” and then the camera cutting out, probably due to Bon finally catching up to him. Brian lays in the dark while two white pupils convulse uncontrollably on the screen, before turning on his flashlight, revealing Bon. Standing over Brian, twitching and covered in Brian's blood. Brian is attacked once more by Bon, suffering significant injuries as a result, and afterwards dying. Brian finally states "i can't feel anything," possibly being paralyzed from the attack, or suffering from extreme hypovolemic shock due to blood loss. He also states that "he thought i was her," which may state that Bon mistook Brian for the likes of Sophie Walten and killed him as a result.

After Sha instructs the viewers that they must always, under any circumstance, carry their BSI ID card, the tape cuts to a still image of Brian Stells' BSI ID card.

Brian is only mentioned by name in this instalment. Sophie mentions that the name BSI sounds familiar, Jenny explaining to her that BSI has been relevant lately after the disappearance of a BSI employee, Brian Stells, in the Saint Juana's Forest only a few days prior. 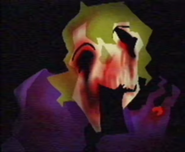 i can't feel anything. he thought I was her.

Brian’s BSI ID card, showing him as a Facility Caretaker.

Brian as he appears in BunnyFarm. 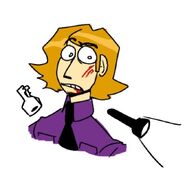 Brian in the BSI Uniform 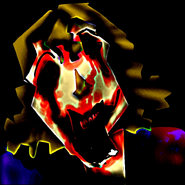 A picture of Brian along with other characters posted to Martin's Twitter.

Brian from "It's That Time of The Year!"

Brian peeking from behind a tree in "It's That Time of The Year!"