Bon’s Burgers is an animatronic restaurant, which is home to the Showstoppers (Bon, Banny, Sha, and Boozoo). It was created by Bunny Smiles INC, and by the minds of Jack Walten and Felix Kranken. It lasted from the 28th of June, 1974, to the 20th of July of the same year.

The idea of Bon’s Burgers began in 1958, when two college students, Jack Walten and Felix Kranken both shared the idea of a restaurant that had animated performers. However, it took sixteen years to actually put it in plan, when Felix pitched the idea to a company by the name of Cyberfun Tech. They took great interest in the company, and soon funded the project for the company to open on the 28th of June, 1974. However, this opening day was a few weeks after the sudden disappearance of Jack Walten.

Two days later, the first birthday party is held at the establishment, one by the name of Jeremy Simmons. Later that day, Susan Woodings, head engineer of the animatronics, went to inspect the animatronic Bon, due to odd malfunctions in it’s compartments. However, upon inspection, Bon attacked her, and killed her either before or while she was in the animatronic Banny.

Meanwhile, during the company’s operation, Rosemary Walten, wife of Jack, would come to the restaurant every day, looking for any evidence in where her husband might be. However, on July 9th, 1974, a voice responded to her concerns, and saying that they knew where her husband was, and that they’ll find them backstage. When she went back there, as the voice told her to, she instead found Bon, who said that she was broken, but he’d make her “beautiful.” He then proceeds to kill her, and her bloodcurdling screams could be heard by the neighbors, which led to Bon’s Burger’s closure. The last day of parties didn’t have any of the animatronics present. They closed on the 20th of July, and on the 31st of October, the building that housed the Showstoppers was officially condemned.

However, at the moment, Felix had thought of an idea: The Relocate Project. He hoped that in an attempt to fix the robots, he would be able to prepare them for a new Bon’s Burger’s restaurant, which was planned to reopen in 1982. It is unlikely, though not confirmed, that this plan came to fruition. 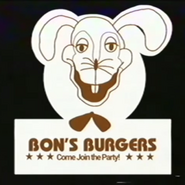