The New Walten Files Wiki
Register
Don't have an account?
Sign In
Advertisement
in: Characters, Animatronic, Showstoppers,
and 2 more

Bon's Burgers (as a Showstopper)

Banny is an animatronic and one of the four Showstoppers of Bon's Burgers. She is currently assumed to be possessed by the ghost of Susan Woodings.

"how much is that doggy in the window?"

In her intact animatronic form, Banny has a feminine humanoid figure and is completely purple, same for her chest, belly, fingers, toes, snout and the inside of her ears, which are white. She has light turquoise irises and smaller black pupils. Her only item of clothing is a Pink bow and sometimes a single black button. She is obviously reminiscent of a bunny; sporting long droopy bunny ears, buck teeth, and a snout.

In her damaged animatronic form, Banny is broken down- having a darker shade of purple and has her silver covering of her left hand, lower right part of her hips and her right foot gone. It exposes the endoskeleton underneath, which includes a distinct hole on her chest.

Her cartoon form in BunnyFarm is almost identical to her animatronic appearance while being more simple and cutesy.

In BunnyFarm, Banny is visibly more fluffy, is a much brighter shade of purple and wears a black bow instead of pink.

Not much is known about the animatronic version of Banny. In BunnyFarm however, Banny is shown to be optimistic, cheerful, preppy, and enthusiastic. She cares about her friends well beings. She was also confirmed to be 16 by Martin Walls, which might explain her hyper and childish behavior.

It is confirmed in BunnyFarm and by Martin that Banny is lesbian, as when the lady controlling The Horse Farm appears, she states, “Woah, pretty horse girl!,” while her face slowly becomes red as if to show she was getting flustered.

Banny does not have any major role in this special non-canon tape, but does appear as a clock in the room Tammy and Duckie spent their last night alive.

In Boozoo’s Ghosts, Banny appears as Boozoo’s co-worker, who has a hard life and is forced to do nearly everything around the toy store with minimum wage.

When Banny accidentally breaks a mug mopping, Boozoo takes off Banny’s pay check as she will not receive any money on Christmas. Banny pleads to him she needs the money for her brothers and Boozoo tells her it’s not his problem and demandingly tells her to get back to work after Banny tells him he won’t pay her.

Banny appears as small cameos throughout the rest of the tape appearing in a thought bubble during The Sad Ghost of Past Experiences song, and Accept Your Mistakes. In the thought bubble Banny is seen being scolded by Bozzoo possibly from her breaking the mug at the very beginning of the tape.

Banny makes another cameo when the Jolly Ghost of Present Times shows, Banny shows Boozoo through her “favorite” toys and what Banny and her brothers go through, and tells Boozoo they are barely staying alive and they can’t even get anything for Christmas. She then tells Boozoo that they’ll all die eventually if he keeps wasting his time. The Ghost then pulls out 2 dolls and begins to kill them as the dolls may represent Banny’s brothers. Boozoo begs her to stop, but she refuses and she then transports Boozoo to the dark hall for his encounter with Mortality.

Banny makes one final appearances after Boozoo returns to his store thinking everything is okay. He sees Banny and tells her how happy he is to see her. Banny then says she’s glad he’s okay and then she begins to glitch out. She then melts slowly until turning into a dark silhouette that may represent she died. It’s unknown if that was the real Banny dying or just an illusion Mortality created to taunt Boozoo. That moment is the last we see of Banny, except her voice actor mentioned in the credits.

A poster of Banny

Holly The Horse from Bunnyfarm. Banny can be seen behind her blushing. This is evidence that the Bunnyfarm version of Banny may have a crush on Holly. 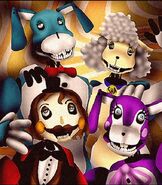 A picture of the showstoppers posing together happily

a drawing of Sha, Bon and banny celebrating Christmas together 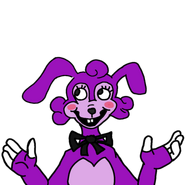 Ditto (The BunnyFarm Image Where Her Sprite Was First Shown), but in HD 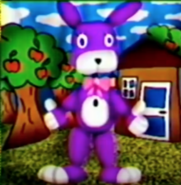 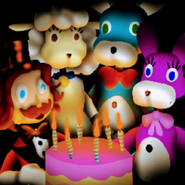 Bon, Boozoo, Sha and banny standing around a cake 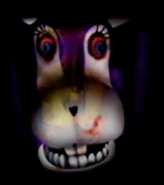 The animatronics in the K-9 from "Lucky You" 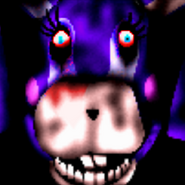 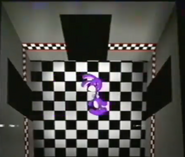 Banny (with Susan inside her) stuck in Bon's Burgers backrooms, unable to escape 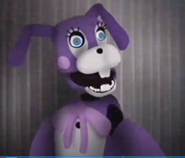 Sha and Banny from the merch video.